The graphic below shows the organizational placement of the Office of the Government Chief Information Officer (OGCIO) within the Government of Vanuatu, and also the main OGCIO divisions. The Chief Information Officer answers directly to the Prime Minister and briefs him regularly on ICT developments. The Technical Advisory Group (TAG) is composed of the IT or ICT officers in the various ministries and agencies. 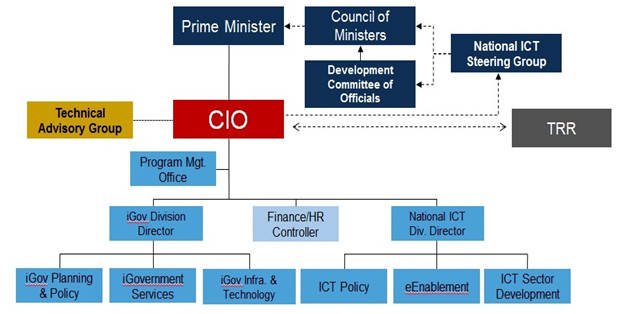 The “TRR” shown on the chart is the Telecommunications and Radio-communications Regulator, an independent agency operating under the laws of Vanuatu, whose mission is to regulate the ICT sector. OGCIO and TRR cooperate closely.

On 23 January 2013 the Prime Minister issued a letter clarifying the appropriate interaction between OGCIO and TRR. In summary, this letter gave the following directions:

The thrust of this clarification is that the OGCIO is an integral part of the Prime Minister’s Office, not a separate entity, and hence submission of some ICT items to the PM (as required by certain sections of the Act) must of necessity incorporate OGCIO’s expertise and review. Note that this clarification does not affect parts of the Regulator’s functioning that do not require interaction with the Prime Minister’s Office.